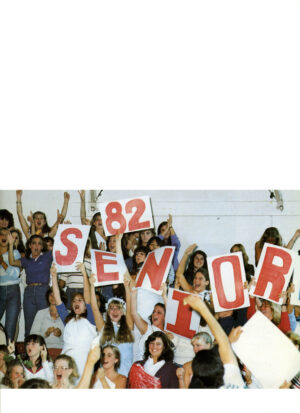 Saratoga High, circa 1959: 350 mostly white students, lots of orchards and an unfinished school. Fifty years later: 1,400 students, hundreds of homes nearby, a diverse student body from across the world, and an increasingly state-of-the-art school.

Saratoga High, circa 1959: 350 mostly white students, lots of orchards and an unfinished school. Fifty years later: 1,400 students, hundreds of homes nearby, a diverse student body from across the world, and an increasingly state-of-the-art school.

Saratoga High was built on a 30-acre prune drying yard in 1958 after the land was purchased from the Lipscombe family for $256,000. It was intended to be an addition to the Los Gatos school district and Vernon Trimble, a teacher from Los Gatos, became principal of the school.

Former P.E. teacher and legendary SHS football coach Benny Pierce had been a student at Los Gatos before being hired to teach at Saratoga. He remembers how small the school had been and how there weren’t many facilities.

“We didn’t have a field, and we didn’t get a gym until about two years after [Saratoga High] began,” said Pierce. “Also, there was just one locker room with a board down the middle.”

Saratoga was still very rural at the time, so the school was surrounded by prune and apricot orchards. The student and staff parking lots were both small enough to fit in the front of the school. There was only the cafeteria, the gym, the 200, 400 and 600 wings and the library. The current band room was the library, and the administration was housed in what is now the teachers’ lounge.

Much of the school remains as it had 50 years ago; for example, the lockers are still the same, along with several buildings.

Bill Cooper, father of senior Sophia Cooper, graduated in 1963. He recalls how, although much of the school has stayed the same, life had been very different.

“Our first year was just freshmen and sophomores, so there weren’t any cars. We had school buses, and that’s how we got to school,” said Cooper. “Of course, you didn’t have to worry about open or closed campus because there’s no place to go and nobody can drive. We all ate in the cafeteria.

“We used to get together on Friday nights and play poker or have root beer, but we never got in trouble. Everybody was very honest,” said Cooper. “We had nice parties in various places around Saratoga and Monte Sereno. Especially on football nights, because the football games in Los Gatos, you go down the hill—it was the Burger Fix then—and that was a good place to be.”

One thing that has stayed the same throughout the years is the classes. There were, and still are, 20 to 30 students in most classes, and there were six 50-minute periods each day. Class numbers and types were expanded each year, but most have been kept the same. For example, the newspaper, the Falcon, and the yearbook, the Talisman, both began with the founding of the school of the school. However, unlike the classes offered today, the SHS back then catered to students who were looking to take more mechanical classes, with classes like auto shop and home economics.

After so many years, Saratoga High has become a special place in the hearts of countless students and teachers.

“I have so many great memories about [Saratoga High] that it would be impossible to pick just one as my favorite,” said Pierce.