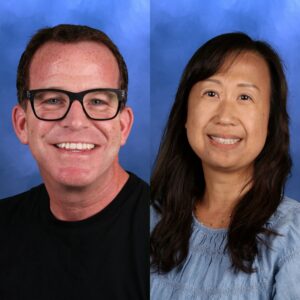 On the evening of Nov. 8, orchestra director Michael Boitz and AP Chemistry teacher Janny Cahatol were honored as recipients of the “Outstanding Educator Award” from the University of Chicago. As an annual tradition, UChicago asks incoming freshmen to nominate teachers who played a significant role in their education. Afterward, winners are chosen from thousands of responses.

“[The university] is going the distance to recognize and cherish relationships with educators,” Boitz said. “They don’t have to do this, but they do.”

Boitz is currently serving his 25th year as a director of the school’s music department, which stands as one of the leading public high school music programs in the country. In receiving this award, Boitz said he feels humbled and honored, yet also “a little bit foolish.”

“I have many colleagues in this profession who are remarkable and also deserve to be recognized,” he explained.

When Boitz came to the school in 1997, Kevin Skelly, the principal at the time, felt that the academically high-achieving school needed a “soul.” This attitude drew Boitz to Saratoga, where he led the revival of the music program. It has remained his primary goal to foster a positive space that welcomes and unites students of all backgrounds.

Years later, Boitz has helped make Skelly’s vision come to fruition, evidenced by the construction of the McAfee Center and the school’s music building, as well as the joy and passion that the music community brings to the school.

With 49 members, 2021 saw the school’s largest freshman orchestra to date, a testament to the program’s ever-growing size. The music department continues to welcome students of all grades, levels and interests.

“It’s addictive, working with the amazing kids here,” Boitz said. According to him, the positive student environment is what made him remain an educator all these years.

Many students in the music department are happy to hear of Boitz’s award.

“Mr. Boitz does everything in his power to help students achieve their potential,” said junior Tejas Tirthapura, who serves as principal violist in Saratoga Strings. “He is totally immersed in his job and deserves this impressive award.”

Cahatol, who has been teaching for 18 years, diverted from a pre-medical track to education after teaching abroad in Africa for a year during her undergraduate years.

“I loved [teaching] so much more than I enjoyed my research projects in college,” Cahatol said. “I can now definitively tell my college friends about how much I love my job, and they can’t do the same.”

Though she has won the Outstanding Educator Award twice before — once from UC Irvine and once again from UChicago — Cahatol felt its true impact this time around when forming bonds with a new set of students.

Looking to create a more casual and trusting relationship with her students, Cahatol cherishes the conversations she can have with them outside of the classroom. She is especially thrilled to be back in person with students.

Cahatol also said that countless educators at this school deserve to be recognized. Still, she is glad to hear that alumni have appreciated their time here.

“If there’s one thing I want any student to do, it’s to thank your teachers,” Cahatol said. “They do so much for you and deserve to be remembered, even if they aren’t awarded.”