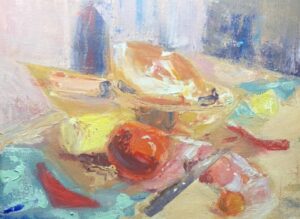 One stereotype of modern teens is that they lead overly scheduled lives and never have time to learn anything on their own. Several students, however, had more free-choice summers that prove the stereotype wrong.

Sophomore Annette Li is one of them. Ever since she was a child, Li held an intrinsic desire to learn and explore music. Growing up, she played cello and often listened to K-pop songs.

When she learned her favorite songwriters were also producers, she wanted to try her hand at creating her own music. However, she never had the time or focus to do so until this past summer, when she pursued her dream to do music production.

Li first started producing music using digital audio workstations, such as Ableton Live, on her computer at home. She mostly self taught herself, playing around with its features, listening to her favorite artists’ music and trying to replicate parts of the song for fun.

“I love listening to anything I’ve created, whether it’s the result of hours of work or simply the byproduct of playing around with effects and settings,” Li said.

Li recommended people who want to try music production to start off by listening to their favorite artist’s songs, as she believes it helps immensely in getting the hang of creating your own music.

“Replicating for the sake of learning is good because it gives you something to practice editing with,” Li said.

Although Li has not had much time recently to experiment with her newfound hobby, she still tries to continue pursuing it in her free time because she enjoys the creative freedom it provides.

“I love music as an art — especially the way it can beautifully convey and bring out emotions,” Li said.

Student deepens her artistic skill to prepare for competitions

Junior Isabella Wang also invested time in a passion over the summer; in her case, she further developed her oil painting skills and tried new artistic mediums.

Wang has been working with oil paint since she was in third grade. With the extra summer time, she was able to branch out to different mediums like soft pastel and charcoal to broaden her range of mediums.

Due to oil paint’s long process and drying hours, she spent at least six hours a week at her art studio painting over the summer, with an additional hour or two at home. Through the tedious but rewarding painting process, Wang has learned a number of important skills

One such skill is spatial awareness: When drawing, it helps her to plan the distance and space between certain objects before she puts her brush down. This allows Wang to better visualize objects in different perspectives and observe the space between them.

Wang usually enters her art into nationwide competitions, one of them being a competition from China called New Time New World, in which she earned first place. In the future, she hopes to continue to grow this skill and use her talents for her college portfolio.

One of her favorite creations is an oil painting of abstract still life. Taking roughly four hours to complete, she started with a basic sketch using charcoal, then added shadows and highlights with paint and finally finished with varnish to prevent the paint from cracking.

Especially in abstract art, artists focus on different color combinations to make their pieces stand out. By using color theory and composition, Wang hoped to draw attention to the details of simple objects.

Although these students greatly improved their skills over summer, they have had less time to continue working on them due to school work this fall. However, both still try to set aside two hours a week to focus on creating art.

“Remember to stay patient because not everything you make will be good,” Li said. “As long as you have a passion and interest for it, keep working toward it.”