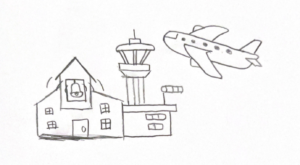 Permalink
The new school bell sounds like it was copied from an airport.

“Ding dong dang,” the new announcement bell rings every Blue Day before tutorial starts. Instead of a simple beep, the new bell now sounds too much like the loudspeaker from an international airport. I keep expecting to hear which flight is leaving at which gate, but instead, the bell rings to inform me about a car parked in the teacher’s lot that needs to be moved. The main issue? The new bell sound sounds too try-hard.

Our campus is not a gigantic international facility focused on transporting thousands of people every day. We are merely a small school with occasional announcements. Half the time, people don’t even care enough about the announcements to stay quiet for them, often needing to ask desk neighbors what the daily joke from ASB was.

As boring as the old bell was, at least it sounded like one made for a school.