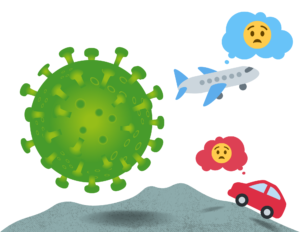 When freshman Will Norwood lived in St. Albans, England, he saw his grandparents every week. He then moved to the U.S. in fourth grade and traveled back twice a year to visit them. Due to the pandemic, however, Norwood has not seen them for two years, so he was looking forward to flying back to England this winter break.

His family’s plans are now veiled in uncertainty because of the emergence of the new Omicron variant.

The new strain of COVID-19, originating from South Africa, was first discovered in the U.S. on Dec. 1 in a San Francisco resident. A second case was discovered in Minnesota the next day in a traveler from New York City. The threat of the variant prompted President Joe Biden to announce new strategies, such as requiring all incoming travelers to test for COVID-19 within 24 hours of departure, that are now impacting students.

“We can leave the country, but because I’m not a U.S. citizen, I might not be able to come back into the country if I leave,” Norwood said. “Our plan is still very much up in the air. The restrictions could change at any point, so it’s difficult to make a solid decision.”

Once Omicron was discovered, Norwood’s family realized they may not be able to visit their relatives for the holidays. He said that the UK, which is among the list of countries that has discovered Omicron within its borders, has just introduced rules stating that travelers must get PCR testing and quarantine for two days while they await the results, impacting Norwood’s plans because there’s only two weeks of winter break.

Another student who plans on traveling during break is senior Ben Bray, who will be driving to Whistler, Canada, with his friends to ski for six days.

The group will need to fill out a lot of paperwork and get tested before getting to the border, he said, so they are preparing early. He has been frequently searching up travel restrictions online and looking at Canada’s government websites for updates on stopping border crossings.

“We’re hoping for the best, but we’re bracing for the possibility that we might get stuck [at the border] and we’ll figure out what happens,” he said.

Bray said along with the majority of the school, his friends have always been cautious, wearing masks and getting vaccinated to stay as safe as they can.

“If we can do a good job controlling [Omicron] quickly, then we won’t have more restrictions, but even if we do, we’ve gotten used to that,” he said.

For Norwood’s part, he doesn’t think that at this point in time, there’s a solid answer on how dangerous Omicron is. The World Health Organization and the U.S. expect it to spread just like any other variant, but scientists are rushing to figure out how dangerous it is and whether it evades vaccines.

Locally, Norwood is concerned that the close proximity of the San Francisco Omicron case might have drastic implications for the school. He said that the situation is “very scary,” but that the last thing students want to happen is to go back online.

The most important thing people can do in face of more variants is to get vaccinated, he added.

“It makes me sad and angry that someone wouldn’t get vaccinated,” he said. “I can understand that people are scared, but you got to take a chance sometimes, especially when risks are outweighed by the benefits. Omicron is worrying. I’d like to see my family after two years, but [if I can’t] I think I’ll struggle a bit more next semester both emotionally and mentally.”