Kicking your feet up after finishing a 3-hour project, you open YouTube and pull up a video to relax.  Instead of being immediately pulled into the video, dismay fills your face as a 15-second unskippable ad pops up. Looking to the bottom left corner, your heart sinks to the floor as you see the tiny […]

After a long lecture, you decide you need a short break and ask to be excused to head to the nearest bathroom. After locking the stall door, you take a quick look around, making sure there’s enough toilet paper left in the dispenser.  To no one’s surprise, the toilet is filled to the brim and […] 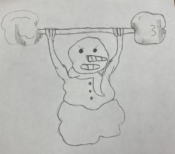 Ever since I watched the movie Creed, a world-renowned boxer over 7 miles in freezing temperatures, I’ve been inspired to train in cold weather to toughen up my body.   With my primary focus on cardiovascular exercises and upper body strength, I typically go for runs several times a week and lift weights in my garage […]

We have all seen the heart-wrenching pictures of turtles strangled in plastic and read about glaciers melting and coral reefs dying due to global warming. Not to mention, wildfires, hurricanes and floods are on the rise, and it’s all because of how we have been living and the damage it’s doing.  While we all are […]

read more »
‘No Time To Die:’ puzzling but enticing

“No Time To Die” premiered on Oct. 8 with Daniel Craig starring one last time as James Bond. Craig starred in a total of 5 Bond movies.  The movie follows Bond as he leaves active service, but his peaceful retirement life quickly escalates when a former CIA agent askes Bond for help on a mission. […]

read more »
Diwali: the festival that lights up my life

The smells of spices such as turmeric, garam masala and cumin fill the air while pink, orange and tan sweets line the dinner table. Incense burns in the corner and small candles in diyas — decorated clay pottery — burn in every room. In the living room, I hear family friends laughing and the sizzle […]

I’m a walking contradiction. I say I’m smart, but I barely manage to finish my homework. I tell myself I have good music taste, but I only listen to BTS, Taylor Swift and Polo G. And I want a partner sooo badly, even though I have no game. I’m a typical student at Saratoga High. […] Known for his stand-up comedy shows, comedian Dave Chappelle has received major backlash for his Netflix special, “The Closer,” which premiered on Oct. 5. While Chappelle built his career on boundary-pushing offensive jokes, his recent digs at the LGBTQ+ community have been pinned by critics for going too far. Despite this backlash, Chappelle has not […]